The diagram below outlines the current structure and lines of communication - a structure which is worked towards during the initial months of a school joining the Trust: 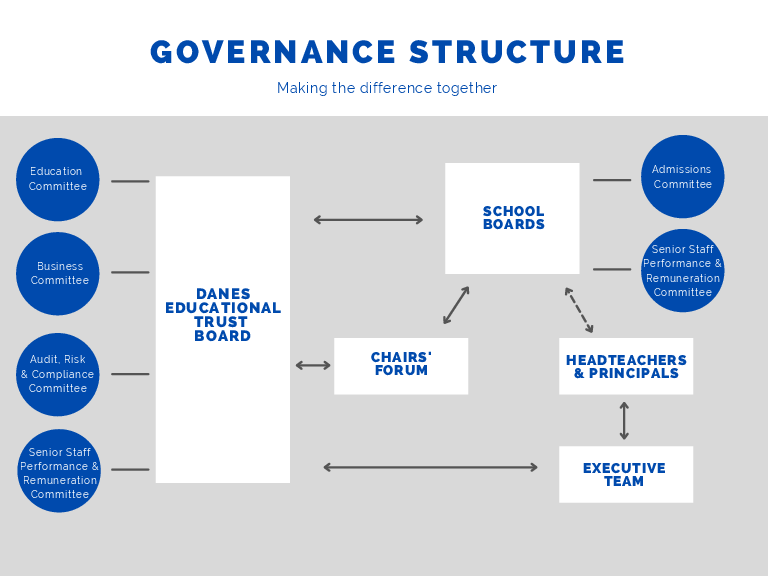 Our members and trustees are a committed and talented group who bring a wealth of experience with which to support the Trust.

Below you will find further details. Those members and trustees marked with an asterisk are also trustees of the Holborn Estate Charity (HEC).

Mike Bruce
Finance & Management
A former Trustee, appointed as a member in 2019. Now retired, was formerly the Director of Information Technology at Moore Stephens LLP a firm of chartered accountants in London.

Rosemary Hadfield MBE
Education
20 years teaching in the UK and abroad in the primary sector. 30 years association with St Clement Danes as a parent, governor and formerly Chair of Governors. HEC Trustee.

From Danes Educational Trust Board:

Kath Unger
Human Resources
30 years in HR within the civil service before moving to the private sector in 2010 as HR Manager for a Hertfordshire based Insurance Broker. Associated with St Clement Danes School as a parent and then a governor from 1998 to 2012.

Nils Blythe
Business
Executive Director, Communications, at the Bank of England (2011-2014), following a career at the BBC where, until 2011, he was the BBC Business Correspondent.

Rob Carpenter
Chief Executive of the Inspire Partnership, a multi-academy trust of 9 primary schools. He is also a NLE and senior partner with Challenge Partners, Rob has experience of school leadership in a range of contexts, including schools in special measures and schools serving a high proportion of disadvantaged pupils. Rob is also a member of the ASCL Council as a primary representative. In 2016, Rob worked with the DfE and Teaching School Council to review primary teaching.

Tim Coulson
Education
Chief Executive of Unity Schools Partnership, a multi-academy trust in Suffolk and East London of 16 primary, 7 secondary and 2 special schools, with approval to open two further special schools and a primary school. He was previously the Regional Schools Commissioner at the Department for Education for the east of England and north east London.

James Freedman
An experienced entrepreneur who has founded businesses in the technology and media sector, most recently selling Zone, a leading digital agency, in 2017. He sits on a number of boards of both commercial companies and charities.

Carolyn Garner
Finance
Currently UK Tax Manager for an international manufacturing company. An experienced finance professional, who has also served on the Board of Governors of an FE college during a period of expansion.

Rachel Gauke
Legal & Regulatory
Solicitor working at a legal publishing company, writing practical guidance for lawyers. Specialist in corporate tax law, with experience as a practitioner and professional support lawyer having trained as a solicitor at Linklaters LLP.

Lynn O'Connor
Diversity
A global diversity and inclusion specialist with over 20 years experience working in and with large corporate organisations in Financial Services, Oil & Gas Technology, Energy, Motor, and Insurance sectors which include HSBC, BP, Centrica, Perry Group and RSA.

Pankaj Shah
A senior business and regulatory programme manager until 2018 with over 25 years experience of project delivery and business change at major asset management and banking firms in the City. Qualified initially with Arthur Andersen as Chartered Accountant.

Join The Trust
Our Schools
1/